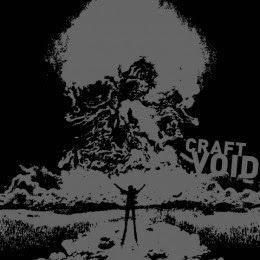 After a lengthy hiatus during which i wasn't even sure they'd return, Craft come out of hiding with the masterful album "Void," continuing their vaguely avant take on traditional black metal classicism and fusing it to something more progressive and disorienting. From the moment the guitars roar from the speakers you're in the thick of it-this is an album by an entity that isn't fucking around. The sound is massive to the point of flatlining, thick and viscous but dusty enough that the atmosphere is a gravelly choke and each drum hit sounds like the bludgeoning sound of club meeting skull. Few black metal band can sound this violent and unhinged, especially in such a controlled way, without resorting to blastbeats and low production value, but Craft shows that it can be done, and when it is you're going to be carved the fuck up in its wake.
"Void" continues the Craft aesthetic of obvious styled black metal reminiscent of Darkthrone and meshing in the more frightening elements of outsider nobles like Ved Buens Ende and Thorns, creating a sound indebted to industrial mainlining but rocking enough to still belong to some semblance of thrash. The atonal moments lend a nausea to Craft's approach, a feeling of something just slightly off kilter. I was distinctly reminded of the Melvins in several places across "Void," testament to the strength of Craft's grinding, strangled slower riffing, much more prominent here than in previous work. Also present are some seriously shredding guitar solos, insane virtuosity in a genre that most often rejects it in favor of trying to attain something more primitive and feeling oriented. Craft's decision to give space over to instrumental prowess does nothing to diminish from the album's atmosphere; instead the searching meandering quality of the soloing helps further the wandering feeling that "Void" so methodically cloaks itself in. The road of violence is replete with many detours; Craft are willing to explore these darkened underpasses with a bloody heart and malicious vagrancy, arriving at a place far more complex and hysterical.
The heart of Craft's sound, though, is their knowledge and embrace of classic black metal form, and those elements are showcased throughout the record's 49 minute runtime. "Serpent Soul" boasts unbridled chromaticism redolent of "Deathcrush"-era Mayhem or Gorgoroth at their most historical, bashing away at riffs that shouldn't make sense but do. "I Want to Commit Murder" trades on one of the dumbest titles of all time and produces a song that actually makes you believe that this is a personality capable of it, that violence and terror are looming in the glint of an eye and the rusted twinkle of a dying star. The riffs recall Slayer at their most convoluted and mathematical and the vocals almost threaten to carry over into grotesque histrionics; it all becomes the troubling confession of a diseased mind basking in its own narcissism. But the true fire burns most brightly in the majestic title track that closes out the record, nine minutes of mid-paced black metal fury that evokes all the sorrow, anger, rebellion, and yearning heard in the legacy of the old masters. Echoes of Bathory's epic war pieces are filtered through the suicidal repetition of Burzum, culminating in a piece that simultaneously screams for nullification and addresses the promising future of modern black metal. In the hands of a unit like Craft, that future is being created with tremendous attention to detail and a reverence for the attitude and philosophy behind the movement's inception. "Void" is powerful stuff, a rejection of self that embraces contemplation and openly minimalizes the worth of the individual. This world is all empty; Craft has the map. Highly recommended.
Posted by Cory at 4:20 PM