THE RITA "THE RACK" (Handmade Birds) 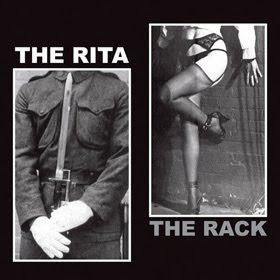 The artwork says it all. Two HNW explorations sourced from knives and nylon, a near penultimate intermingling of violence and sex, the errant whiff of fetid eroticism transformed into waves of throbbing, pulsing, manipulated tone. While the volume is beyond intense, the actual feel of the two pieces here is quite restrained-the nylon side especially showcases something close to the caressing side of HNW (if such a thing exists), a deep and subtle massage of hidden recesses infrequently torn asunder by the shatter of yarn separating from yarn, the shimmer of gleaming nylon wrench astray from loom and weave. To shape beauty out of destruction takes a deft hand, and The Rita masterfully immerses itself in pinup bondage fetish aestheticism to warp the vestiges of atrocity and violation into a sound experience that resembles the cloudy murk of hallucination. Nylon oozes lust, the glimpse of a stocking welt almost universally accepted as taunting, the lurid pull of the forbidden, the feminine, the denied. Thrown in the face of the supplicant, the beggar, this tease whips itself into a froth of unchecked libido screaming to erupt, the inevitable bloodplay tied to its resolve the only truth remaining, perhaps the only truth possible.
The piece sourced from knives veers harsher but only by a bit. This, too, is a game, one which The Rita knows all too well. The gleam of the knife is like the gleam of the stocking, the smooth, clean, pristine surface of the blade like the shimmering yarn clinging to the smooth contour of a leg. Light glints off of both, both betray a feminine core, both admit the lustful attentions of personalities fractured by societal neglect and disdain. One within the other, light upon light, a shivering dance of pale glossy reflection in the midnight. In the narrative of "The Rack" the nylon invites the violence and the knives commit it. The knives reek of metal and clang, their sounds treading closer to the industrial snuff film roots of power electronics, the implications betraying that particular influence completely. But whereas those acts needed words to convey the ideas of degradation and misogyny, The Rita relies solely on sound and image. The artwork is appropriately stark, referencing the simplicity of the items and the gravity of the actions they incite.
This is a unique and powerful record. The shapes The Rita coaxes out of these two totem items are severely oblique but really only open to one interpretation. This is the new face of PE. While other wall recordings are more vast and encompassing, "The Rack" is a study in focused (and maybe unwelcome) intimacy. As immersive as these sounds are, they're but a mere gloss of the lips against the skin, the dank breath of the panting wanton against the barren skin of the controlled object. Bound in the chains of sex and imagination, helpless against the conceit of power. "The Rack" is a definition, an evocation, a wisp of the puerile and the immediate. Gratifications are to be taken; nature must be sated. The need is an infection, the nylon and the knife existing as evidence of its festering. Sick and warm, a stench is in the air. The streets stretch almost endlessly into the night. The hunt is on.
Posted by Cory at 5:25 PM