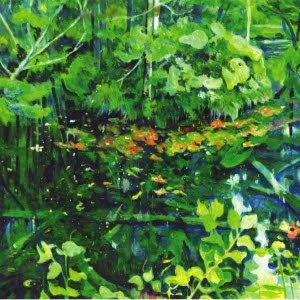 Newest EP from amazing celestial guitarist James Blackshaw, showcasing both his incredible strengths and nagging weaknesses. "Holly" features two new compositions, the title track being more of the sort of material he's been cranking out lately; the flip side, "Boo, Forever," is something more like a return to form as well as an acknowledgment of influence. "Holly" opens up promising, with some simple, lovely and sparse (by Blackshaw's standards) guitar playing, creating the sort of aching atmosphere that categorised his best work for Celebrate Psi Phenomena. That spell is quickly broken, though, as Blackshaw adds all manner of unnecessary instrumentation to the piece, giving in to the compositional waywardness he displayed on "All is Falling" and "The Glass Bead Game." There's simply too much here for the piece to sustain-it works best as a study for solo guitar, and its most beautiful, yearning moments reinforce that, being played by Blackshaw alone. The cellos and pianos only serve to distract, taking away from what's otherwise a very elegant and hypnotic bit of music. I can understand Blackshaw's want to move beyond his being thought of as simply a guitarist, but bogging your music down with things it doesn't need in the service of some frazzled concept of symphonics doesn't mean you're a composer. It just means you can write music. That isn't to say that "Holly" isn't worthwhile-it is, it's gorgeous, and there's so much melody here that you'll get lost in it on repeated listenings-it just can't support the weight of Blackshaw's ambition. What he does is altogether too fragile to exist in anything but skeletal form and all the extra sounds tend to tear me away from the emotional gravity of his playing.
The second piece, "Boo, Forever," fares much better. This is Blackshaw in full-on fingerpicking mode, ripping out a lovely meditation that nods to both the otherwordly guitarscaping of Robbie Basho and the slightly country-fried twang of the Takoma school proper. Blackshaw's fingers weave nimble webs, threading in and out of consciousness the same way a memory starts to fade from mind. The feeling of loss is the same-regret tempered with beauty, the treasured memory slowly becoming cloudy and lost to the span of years, nostalgia as a haze, a flurry of notes painting a washed out portrait of loss and sadness. Here too Blackshaw adds instrumentation but it's in service to the song, rather than the overwrought bouquet of sonic ingredients that sinks "Holly" like a stone. "Boo, Forever" works as minimalist maximalism precisely because each element makes itself known for only as long as it has to. The guitar remains hyper and constant and everything else recedes into it, creating the blur that typifies Blackshaw's best work.
There's something kind of magical about this record. On the one hand it's a glut, overflowing with dead weight. On the other it's a reminder of why Blackshaw's name is spoken of so highly amongst guitarists, myself included (his early material still pulls pieces of me away from myself when i listen to it)-there's no one out there right now playing like this. Plenty of people can set the fretboard blazing, and still more can make notes and melodies that cut like knives, but i'm hard-pressed to think of anyone that can make the sound of a guitar feel like you're living in a memory. James Blackshaw is a guitarist, but he's also a painter, one who truly understands the importance of recollection and contemplation, the weight of regret and the haunt of sadness. All missteps aside, "Holly" is worth hearing. Very nice artwork as well.
Posted by Cory at 7:46 PM