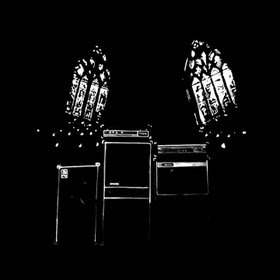 Abstract metal minimalism from the mighty Gog, rendering majesty into epic shades of gray. Three long excursions into nowhere, the sound of amps melting down and guitars not being played, a whitewash of howling noise besieged by wisps of melody and the inference of song. It's all in your mind, and Gog plays with your wants the way their forebear Skullflower played with riffs. Everything is suggestion. A chord being hammered into submission ceases to be only that when it's soaked with enough volume; amplification becomes as much a mental exercise as a physical one.
"Heavy Fierce Brightness" is an illustration of stagnancy gone festering. The drunken plodding that eventually whips up is far less powerful than the crushing docks of feedback left out to hang in the nowhere-instead of mainlining forward propulsion Gog take you out into the tides and ask you to keep treading water, knowing that eventually you'll just give in and swallow enough to sink directly to the muddy, vague bottom. This record has no start and no beginning; track divisions seem arbitrary at best, taunting at worst. The idea that any of this has to go anywhere is the idea Gog want to obliterate. The true understanding comes from the acceptance of time distention and the willingness to let all of this in at once, rolling over your ears like a thunderstorm, stinking of rock's bloat and filtering metal's directness into something new and tortured. If hollow has a sound, Gog knows how to tap it.
It's been a steady progression towards this, and i'm hoping future Gog recordings will focus less on any sort of momentum and more on the screaming, voiding drone that they're beginning to unveil here. The band's aggression is wired to a weird aspiration to beauty, not unlike Birchville Cat Motel but more born of earth and less celestial. Gog's focus is on working with what exists and shaping it rather than Birchville's utter transformation; a guitar is a guitar, etc. But this grounding allows Gog to veer closer to genre and co-opt ideas of doom metal and noise music and create something more ethereal out of them. The musical color may be a constant but the suggestions are ever in flux, and that warbling in and out of expectancy makes "Heavy Fierce Brightness" a more interesting experiment than it could have been. If Gog continues to grow in this manner, they'll be one of the better US practitioners of this sort of destructionism since Gravitar. Beautiful packaging and construction by Utech as well, as always. Obviously worthy of support.
Posted by Cory at 5:52 PM