EVAN CAMINITI "WHEN CALIFORNIA FALLS INTO THE SEA" (Handmade Birds) 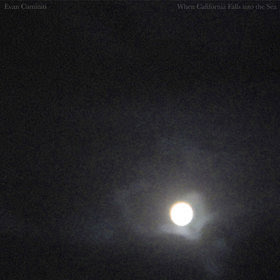 As much a transmission from the great vacuous lonesome as a guitar album, Evan Caminiti's latest explores the claustrophobic allure of bedroom isolationism, beaming in the expanse through a narrow, obvious vision. Highly original this is not, but it is mostly enjoyable.
Caminiti's main idea here is a vaguely psychedelicized take on Neil Young's epochal "Dead Man" soundtrack, with the young student relishing in employing all the master's tricks. Rumbling distortion, cloudy windswept echoes and delicate, cracking lead lines all point to the existential infinity, with each song feeling more like a sketched out scoring device than a full and deep composition. Caminiti knows his way around the neck and his playing is fluid enough while still retaining the necessary amount of feral rawness to qualify as damaged; though the artwork on the LP jacket shows on a full-on moonscape the sounds contained within come off as decidedly sun-baked and brain-fried. This is music for the desert, a world of endless cyclical contemplation where consciousness constantly fades in and out. It's as close to astral as you can get in the physical, and the idea of great open spaces void of other people is expertly conveyed by Caminiti's playing.
Sadly, this record is unable to transcend its influence. Young did all this better and more definitively on "Dead Man"; Caminiti's take merely references and reminds without offering anything new. I won't say that he's untalented, nor will i say this record is without worth-it's certainly a nice blast of lonely guitar lamentations and it's incredibly well-crafted-but it's lack of focused voice is problematic enough to suggest a "quantity over quality" issue regarding Caminiti's sizable back catalogue. At a brief 25 minutes, "When California Falls Into the Sea" feels strangely lacking considering it's epic moon-washed reach. It seems you can stretch a drone out forever and call it a major work without anyone blinking an eye (perhaps unfairly), but when it comes to actually picking up the guitar and and trying to craft an immersive world of sound the demands are more refined.
Posted by Cory at 2:07 PM