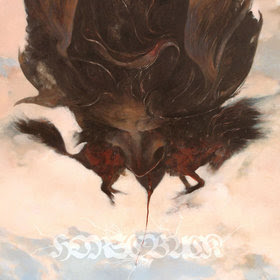 A frustratingly duophasic effort from the equally frustrating Horseback, showcasing both the positive and negative qualities typified by this band's output. Difficult to pin down as far as genre and aesthetic, Horseback exists in a confounding sort of intersection between sun-bleached, desert-dusted psychedelia and oppressive, wintry black metal, never really finding a way to negotiate any sort of meeting place between the two. No single release from this project is able to effectively marry their interests, and while the ambition of the project is admirable the results never live up to the hype for me.
"The Gorgon Tongue" is comprised of two previous releases showcasing different sonic extremes. "Impale Golden Horn" is the far more effective, engaging, and engrossing of the two, delving deep into fluid, celestial drone and dispensing with virtually every previous sonic hallmark the band relied on. Instead of washed-out blackened Duane Eddy rumble we're treated to a smearing of heavenly guitar shimmer, as melodic and optimistic as their split with Volitgeurs was negative and nihilistic. Here Horseback aims for something far greater than what they'd been working at before, and the reach pays off. This is severely gorgeous sound painting, akin to the fuzzier work of Tim Hecker or the more strictly atmospheric end of Nadja's output. Tones stretch and waver and break into new pools of radiance, mirroring the reflective contemplation of mythology and worlds past our reach. Primarily instrumental, "Impale Golden Horn" gives in to the idea of structure on only one song and even here the vocals are delivered in a clean, simplistic manner befitting the cloudy mise en scene. This is pure blue sky, free from oppressive influence and given only to narcissistic inventory, an environment created for total immersion. Here Horseback tosses you a set of wings and demands to know how high you'll fly; the only thing that can really happen is the world loses sight of you, and in the shimmering thrush of "Impale Golden Horn" that isn't cause for fear.
"Forbidden Planet" is an exercise in sheer banality and boredom compared to its predecessor. While much of the original idea remains intact (ambiance and atmosphere) here the band chooses to muss up what could have been another moment of grace and beauty with an overbearing reliance on black metal vocal theatrics. None of the music here demands a voice, especially one as jarring and removing as this. What worked so well on the Voltigeurs split fails here miserably, resulting in a suite of music that sounds amateurish, ill-thought and near comical. The vocals are so off putting that it became difficult for me to even remember what the music on "Forbidden Planet" sounded like, other than a rehash of the majesty found throughout "Impale Golden Horn." Whether the lyrics to "Forbidden Planet" serve some sort of narrative theme is an absolute irrelevancy for me; they're total complete shit, they ruin the composition, and they should have been excised from the final product. "Forbidden Planet" illustrates the problem with Horseback-there's simply no real fixed identity. Genre-hopping is fine but it only really works when there's an underlying anchor in the project's thematic aesthetic. Simply flitting between ambient and "black ambient" doesn't show any sort of vision; it just fucking sucks. If Horseback could ever really figure out what the fuck it is they want to do, i'd be willing to put more effort into their evolution. As is, they're just an overhyped, critical praise-soaking blimp hoping to find a home amongst the modern black metal intelligentsia. They shouldn't.
Posted by Cory at 5:47 PM