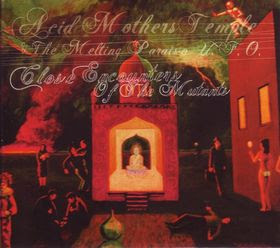 One of the most difficult to obtain AMT releases (it's taken me several years to track this one down), surfacing during the troubled period after Cotton Casino's departure, "Close Encounters of the Mutants" finds the group relishing in the magic of gooped-up ultra-fuzz droning, a meandering piece of work that exceeds its own simple ambition by giving in to tremendous guitar excess and psychedelic knob-twiddling. For me this is one of the better albums post-Cotton, a drooling dollop of space-crazy extremism and vocal histrionics courtesy Afrirampo, the group's chosen replacement for their missing muse. The pixie-ish ladies of Afrirampo perform more than admirably here, shrieking and giggling like some candied version of the girls from the Mothra films, dancing in and out of the headphones like spirits of the ancient Japanese forests that AMT have been known to evoke. The magic of those mythologies infects this record with a focused intensity that AMT haven't shown in a good long while; this whole album feels like some sort of narcoleptic spell wisping out to hypnotize and transform.
The guitar sound here is like syrup. Thick and viscous, dripping with bloated fuzz and booming echoes, Kawabata's destructionism is front and center here, with every other sound receding behind the walls of distortion that ooze across the album. The weight of the fuzz here feels almost oceanic, like the music is threatening stagnancy despite it's flitting, dancing, anxiety-ridden tendency to veer off into nonsensical freak-out territory best defined by frustrating works like "Absolutely Freak Out-Zap Your Mind!" and "Are We Experimental?" But while those albums test all but the AMT completist with their arguable pointlessness, "Close Encounters of the Mutants" evolves to a position of essential-ness by way of its disjointed attempt to find a voice. The pieces here are totally different from one another, lacking cohesion but attaching themselves to each other through the framing sonic absolutism. The record culminates in a massive twenty minute drone that sounds like it's played through heavily delayed bagpipes-whatever the actual instrumentation is becomes less and less important the as music invades your mind and dumps its brain-melting sludge into all the corners of your skull. It's as heavy as the AMT have ever been, trading the guitars for something much more deeply cosmic and lulling, the violence of the previous pieces transforming itself into a numbing wave of gorgeous, brutal room-shaking ambience.
As a document of a group in transition, "Close Encounters of the Mutants" is a fascinating album, showcasing an intensity that very few AMT albums have been able to attain. It's also easily the best record from the Afrirampo line-up, seemingly hearkening back to "Univers Ou Zen..." with its far-reaching eclecticism and willingingness to explore total psychedelic saturation. While it lacks the scope (and length) of a flat-out AMT masterwork, it's a necessity for anyone looking to truly grasp the many and varied faces of Japan's premier brain-fucking cosmonauts. Obliteration and annihilation go hand in hand with a folk-laden serenity, crashing into the bruising walls of tonal massage that close the suite out, resulting in near total sacrifice of self in service to a greater understanding. It seems criminal that this one didn't get a wider release in the states, but it's worht thee years it might take to track it down. Bludgeoning in the best possible way, reveling in its own corpulence-arrogance is rarely this justified, but "Close Encounters of the Mutants" deserves to lord itself over all contemporaries.
Posted by Cory at 4:35 PM