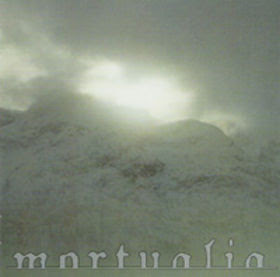 Originally released in 2007, re-released domestically by Moribund Cult. Mortualia is one of the many side projects of Horna's Shatraug, focusing on repetition and the depressive atmospheres commonly found in suicidal black metal. Horna has long been one of the most problematic black metal units for me, with a lengthy discography littered with mediocre material that ocassionally spawns works of amazing BM art, like disc two of 2008's "Sanojesi Aarelle." That record in particular traded Horna's usual chromatic duststorms for something much more melodic and unrelentingly hypnotic, basically hammering away at a riff for minutes on end until a voiding blur of speed and disgust was achieved. It signaled a side of Horna that perhaps had been lying dormant; it could also have signaled the inevitable cross-pollination and self-cannibalizing of material that occurs when someone from Band X is tied to 20 other projects (case in point: the minimal difference between Horna and Sargeist, of which Shatraug is the principal composer as well.) Either way, it was and remains Horna's best work. Small wonder that it followed just months after Shatraug unleashed Mortualia's self-titled debut.
Consisting of five tracks (this re-release adds an incredibly unnecessary sixth) and clocking in at near 70 minutes, Mortualia is an epic sprawl of strained sorrowphonics and insane, hysterical caterwauling vocals. Close to the ghostly style of extreme vocal acts like Urfaust, Devilish Era or Silencer, Shatraug shreds his throat raw in an attempt to drag you down into the void of feelings that "Mortualia" ultimately becomes; while at times the vocal performance seems a little over the top, more often the extremity works, helping to create a suffocating atmosphere that washes over like so many grey clouds come to bring hopelessness. Without the vocals (and there are many lengthy passages without) the music mires itself deep into the mucky trenches, drowning itself in pools of stagnant self-loathing and bitter, choking depression. The level of mesmerization that Mortualia achieves is commendable; the guitars are almost eternally out of tune and tinny, the drums amateurish and the bass lumbering quasi-melodically like some bastard son of Ulver's "Nattens Madrigal", but it works. Marvelously, in fact. This is some seriously hypnotic material, and i found myself lulling out and falling deep into something close to catatonia as the album worked its magic over me.
Lesser bands have tried this formula and found it difficult to maintain any level of quality (the vast majority of Self Mutilation Service's catalogue speaks easily to this); bedroom black metal is unfortunately a province open to anyone with a guitar, and a computer. But where so many others have failed, Mortualia basks in a sorrowful, ragged glory. Frustrations become vexing oaths of vengeance sworn at both the world and the self, a feeling of disgust welling up inside that threatens to consume its host in a desperate act of final self-immolation. Razors across wrists, nooses strung up for necks, bottles of pills emptied without leave. Any and all are fitting for the environment that Shatraug has so carefully crafted as Mortualia. The music itself begins to act as the abrasion, slicing away chunks and leaving flailed and pained wafts of flesh where once was whole. It gets in, and it starts to hurt. That's what suicidal black metal is supposed to do. It's music for sorrow, it's music for hate, it's music to kill yourself to. Mortualia attains this, daring you to light a candle and snuff out a flame. Agony can be transformed into art and pain can become beauty, but this is all ugliness and despair. Bury your head in your hands and hope it will pass by. Or give in. Either way, this won't go away.
Recommended.
Posted by Cory at 8:11 PM