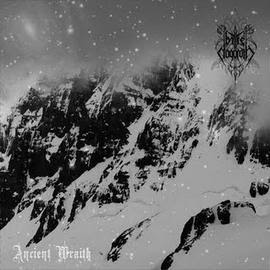 Distant and austere hyper-elitist black metal from the depths of USBM obscurity. Sitting somewhere between the voiding nowhere frost-ambience of Paysage d'Hiver and the manic, throat slitting bloodlust of "Deathcrush"-era Mayhem, Battle Dagorath stake a claim for black metal's future, a future that narrows its vision to the point where progress ceases to exist and reverence is the reigning mood. Cloaked in ghostly atmosphere and drenched in frigid ferocity, "Ancient Wraith" is exactly that-an unrelenting endurance test of snowblind, screaming black metal fury evoking the violence of the movement's inception as well as the epic feel of time stretching contemporaries like Krallice and Deathspell Omega. But where both those acts shroud their presentations in a cloak of pretentious composition orthodox commentary, Battle Dagorath exist solely for the purpose of black metal as a force, a near living musical entity possessed of a unique and volatile spirit that speaks in a voice beholden only to those desperate enough to seek it out and face its trials.
Comprised of four sprawling tracks plus an into and outro, "Ancient Wraith" makes its intention known from the outset. Swirling winds and blowing snow are heard amidst a whorl of majestic, sorrowful keyboard dirging, each note breathing into the next and growing ever more ominous. The breaking point hits and the band then launch into 45 minutes of sheer blackened assault, barely letting up across the album's length, pausing only to swarth you in dissonant, yearning melodies and frost-scalding ambient stretches, creating the idea of snowstorms as mesmerizing gateways to the void, the closest approximation of nihilism and decimation that the earth offers. This is nature rendered in an almost godlike, mythical manner; this is an illustration of all human life being snuffed out by a force that always was, and always will be, larger and more encompassing. There's an anger present throughout "Ancient Wraith," perhaps the same sort of disgust that Varg Vikernes felt toward the new gods of Norwegian culture, perhaps a simple desire for the eradication of all humanity and the quiet but beautiful loneliness of the howling, empty winds dashing through the forgotten landscapes of history. Whatever the source, this rage consumes and ignites Battle Dagorath's intensity, resulting in a black metal record of unparalleled sonic violence that can't help but burn itself out; the outro track is a 20 minute eruption of amplifier vomit and pure distortion meltdown, a communication from the abyss that somehow seems soothing and lulling after the hypnotic devastation that preceeded it.
This is an album that is seeking nothing from its release other than its own existence. There is a feeling that this band could give a fuck about anything anyone has to say regarding their work-it simply is, and that should be (and is) enough. Few modern black metal bands (especially from the US) so effectively channel the spirit of the old masters; in "Ancient Wraith" it's difficult not to hear the influence of the snarling chromaticism so present in the earliest Mayhem recordings or the epic, pagan feel of Nargaroth's landmark "Herbstleyd" album. Rather than merely regurgitate these sounds, though, Battle Dagorath imbues them with a distinctly US aesthetic marked by deep ambient explorations existing in the outer vestiges of black metal's reach. This is where the sidewalk ends, and an infinite drop-off into nothing begins. The feelings here are real. This is not manufactured intensity for the extreme masses. This is obtuse and hidden, giving itself over only to those who are most worthy. This is the continuation of black metal's philosophy, going beyond aesthetics into an appreciation for what black metal actually stands for. Pure winter hatred, natural reverence, nihilism, rejection; these are the cornerstones of wrath, tossed like a bloody glove into the faces of the weak and sedated. Highest possible recommendation.
Posted by Cory at 7:12 PM