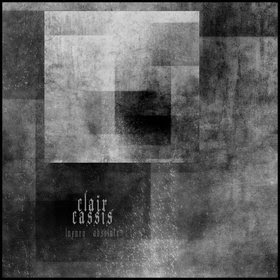 Few modern black metal bands have been as willfully obscure as Clair Cassis, seemingly intent on draping their entire output in a haze of wanton unknowability, the fogs of mystery shrouding their catalogue and giving way to a confounding amalgamation of severely hypnotic black drone and a stargazing sort of deepest-night dreampop. "Luxury Absolute," their third recording, continues this mesmerizing descent but does little to take it any further than it's already gone, content to drift along a molasses sea of thick, unctuous guitar fuzz and absolutely cavernous walls of bass. This is a very heavy album in a literal sense; the low end will pretty much rattle any speaker you play it through, no matter the volume. Of course the record is designed to more or less bury you under sound, so higher volumes are going to yield more immersive results. The overall effect Clair Cassis have always aspired to is a feeling of drowning and here the sonics reach that desired oceanic level; "Luxury Absolute" wants to pull the listener down, dragging them to the nadir of existentialist inquiry until it becomes an astral experience wherein the self becomes one with the totality and all ties to the material are cut.
As a band, Clair Cassis deviates little from the formula previously laid out by its parent unit Velvet Cacoon. Huge washes of thick droning guitars cloak themselves in low end goop and run themselves into oblivion over vaguely audible drums. Clair Cassis run a little closer to the line of structure-the drums are actually present in the mix-but this is still black metal at its most syrupy and narcoleptic. The major difference between Clair Cassis and Velvet Cacoon lies in album runtimes; where VC was content to stretch things out to near infinite lengths, CC revels in brevity, crafting little black metal nuggets that hover around just long enough to begin sinking in before they wisp themselves away like fogs across a stinking river. Simplicity dominates, with most songs being simple two or three chord progressions; atmosphere does the majority of work across "Luxury Absolute." Opener "Antique Sea Smoke" is almost bouncy in its crushing waltzy lope until it recedes into a gorgeous and haunting web of acoustic guitar fragility. "The Royal Nocturne" cloaks itself in progressive dissonance, betraying the band's more modern post-rock leanings. "Olive Ink Seahorse" is lovely black metal by way of My Bloody Valentine style overwrought guitar aesthetics, while "The March of March" approaches a near krautrock level of bludgeoning tribal repetitiveness, pretty much demanding subservience to the awesome wall of guitar vomit spewing forth. "Under Sleep Grey Elms" reverses the opening formula and segues lonely acoustics into a forbidding cloud simplified math rock forumulae, nearly collapsing under its own bloated weight. Only "Soft Castles" truly recalls the empty majesty of Velvet Cacoon, a three minute dirge of soupy bass tones and windy fuzz scars.
Overall the album feels incredibly brief, but that's to its strength. Whereas Velvet Cacoon could wear out all but the most devoted insomniacs (of which i am still one) Clair Cassis strikes quick, cuts deep and leaves you wanting more. It's fitting that they're on the Khyrsanthoney label; the band's focus on opium-esque soundscapes and evocative word paintings meshes well with the label's dreamy, blackened tone. Visiting their website is like falling into some dying ancient beehive, where the honey is well beyond fermented and the buzz of the dead bees haunts every corner in spectral, cathedral-like detail. Dank fetid oceans and rotten beehives: it's either the foul measure of pretension or the new stench of paradise. The choice to wade in and drown drunkenly is left to you.
Posted by Cory at 5:52 PM