DISMA "TOWARDS THE MEGALITH" (Profound Lore) 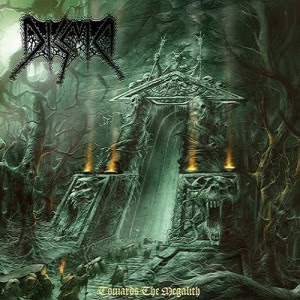 Guttural cthonic immersion dressed up in the trappings of classic era death metal from Disma, one of the best examples of death metal revision that i've heard. Everything about this is cloaked in the atmosphere of the early '90's, from the gorgeously Satanic terror fantasy of the cover artwork (which is glorious and must truly be seen spread across the disc's six panels) to the muted production and murky bludgeoning audial trauma spread across the album's eight tracks. Opening this thing up, it even smelled like all my tapes did back in the '90's, that undefinable sort of "book" odor that reminds of being 12 years old and cracking a Napalm Death tape open for the first time. This is a pure act of reverence as well as a revitalization of extreme music, veering away from pointless complexity and getting back to the frightening basics of death metal.
While Disma doesn't shy away from tempo changes, the majority of "Towards the Megalith" basks in a sludgy, sloping gate, a race forward in half time driven by relentless, punishing double bass repetition and thick distorted bass throbs. Guitars are mudboxes, tuned so low as to be wiping themselves across the fretboards in hobbling resonance. It's a sound that hearkens back to both Entombed and Morbid Angel at their respective bests, a bottomless grinding hole of shredded amp crust-overs and boiling tar mixed together for maximum yield. Disma strengthens their connection to death metal's glorious past even further with Craig Pillard's vocal performance, a tortured descent into the further reaches of untampered human low end. There are no vocal effects or drum triggers to be found here-this is pure and raw, coming at your ears like a chainsaw gutsfuck of hulking, bloody proportion. Pillard's work with Incantation was always phenomenal, and here he guides Disma to the sludge-minded peaks that Incantation was headed towards. The refusal of complexity lends an immediacy (and a weird approachability) that a lot of modern death metal simply lacks. There's no pretension or aura of infallible musicianship obscuring Disma's intent; they're simply out to rip your fucking face off. A million hyper-complicated unplayable riffs don't mean shit when they're thrown against one raging death metal groove; the hypnotic zone-out potential of death metal classicism wins out everytime.
But Disma aren't just some nostalgic throwback. They're a band existing between the lines of defined extremity, furthering a sound that never should have really stagnated. For whatever reason, death metal as movement pretty much disappeared by the mid '90's. Extremity without image (the sort that black metal began to unwittingly cultivate for itself) became borderline ridiculous. Now the curtains have been drawn back to reveal throngs of fans still desperate for that classic sound, the sort delivered by Carcass, Disincarnate, early Deicide and more. Modern death metal, especially of this sort (as well as the style done by bands like Vastum, Encoffination and Coffins) is less revisionism than it is picking up where something left off far too prematurely, a taking up of the mantle to continue the mission began so long ago. You could make the argument that death metal reached its end by simply having nowhere left to go-no one will ever make an album as complex and raging as Deicide's "Legion" and it'd be hard to surpass the majestic elegance of Carcass' "Swansong"-but it could also be argued that the formula had been perfected, and what was left was for interesting and creative projects to come in and work within the templates to push the genre as a whole forward. This is what Disma does. "Towards the Megalith" is that superlative record that both references and exceeds its pedigree, a work of suffocating density and vitriolic aggression rendered in classicist terms. It's importance can't be understated, and it's status as a death metal benchmark is more than assured. Recommended.