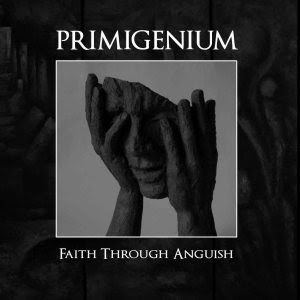 Totally surprising return for Primigenium, after nine years of dormancy. Their last effort was the Drakkar-released "Intolerance" in 2002, a hateful slab of borderline war metal that wore the masques of black deep into the caves of obscurity, courting indifference from the vast majority of critics and even some open hostility from listeners. Often accused of a serious lack of creativity, Primigenium have refused to eschew black metal classicism since their inception, never veering far from the template established by Mayhem (easily the major influence) and flirting with an ideology that embraces serious anti-semitic overtones tempered with a touch of suicidal anxiety and frustration. "Faith Through Anguish" sees the band reduced to lone member Smaug and ushers in a deeper influence of depressive aesthetics, with six tracks that reference his work in side project Shroud as well as the obvious nod to black metal's violent beginnings. The result is the band's strongest album to date and a seriously welcome comeback from one of Spain's few contributors to the black metal genre.
Across the album's 42 minute runtime, Smaug displays an impressive artistic obstinancy that chooses to pretend the last 15 years or so never happened. For Primigenium black metal begins with Mayhem and ends with Striid, staring through a five year window that reduces the idea of growth to a whisper on a horizon miles and miles away, separated from modernity by an ocean of tradition. Every song trades in simple melodic riffs anchored by severe double bass heroics, achieving a hypnotic repetition that bestows an impressive sense of severity. The guitar tone and heavily muted phrasing recalls Metallica's on "Ride The Lightning" while the speed is all "Deathcrush"-era Mayhem. The aggressively chaotic nature of this sound gives "Faith Through Anguish" a heaviness not usually found in black metal; there's an intensity running throughout that reminds of power violence or completely unhinged thrash metal by way of early '90's Ministry. It sounds weird but it makes sense when all the parts add up: it's violent, oppressive and freezing cold. Vocals are equally weird, veering between haunted caterwauling, choking graverasps, death metal low-end extremism and majestic actual singing. Normally such a varied approach yields a schizophrenic pointlessness but here it works, recalling the low/high effect that characterized early Deicide.
Many Spain-area black metal bands (Grim Funeral, Defuntos, etc.) fall back on extreme dissonance to give their music an entirely separated, almost-nauseous atmosphere and Primigenium are no different. The crushing opening riff in "Third Floor" is nearly transformed by the dissonant inflection upon it's reemergence towards the song's end, making everything feel far more off-kilter and frenzied than it really is. So too the main riffs in "Faith Through Anguish I: The Abysses," where the chord voicings veer towards the atonal, creating complex finger-benders worthy of Dave Mustaine's most composed outings. For all that, though, Primigenium can't abandon the sheer rock majesty of cookie-cutter black metal, and the endlessly furious buzzsaw riffing and wintry ambience evoke the very best of the old masters. Primigenium isn't afraid to reach even further back into metal's bag of tricks, either: the guitar solo that takes you out of "The Abysses" is sheer melodic neo-classicism, soaring and moon-minded in its singular quest for sky-cleaving.
For a band that had all but disappeared, this is a phenomenal effort, and easily one of the most enjoyable no-frills black metal recordings i've heard this year. There's no posturing, no real display of influence other than the genre template (albeit with a few classical garnishes), and no fucking around. The incorporation of more suicidal textures lends a heft to the sound and atmosphere that wasn't there on previous efforts; here those weeping melodies and sorrowful, elongated structures serve as a portal to take the listener ever-deeper into war-ravaged realms of mental strife and ideological stratification. By invoking history and embracing primitivism, Primigenium have created an album that sounds like it belongs in the now. Their contemporaries, past or present, have much to meet in terms of artistic achievement if they hope to even approach the grandeur of "Faith Through Anguish"; by the time Smaug screams "Fuck you all" towards the end of the record you can't help but feel it's directed at all those who left Primigenium, as well as the pure black metal they proffered, behind. Such banal dismissal usually rings hollow but here it's warranted, justified, and venomous. While it's something of a surprise that Primigenium are still around, "Faith Through Anguish" demonstrates the strength of black metal as a genre. If simple regurgitations garner critical accolades, the real thing should pretty much lay the current black metal landscape to waste. Be wary of the pretenders.