NEKRASOV "IN SOLITUDE AND DARKNESS, THE LAST STEP IS MADE" (Void Seance) 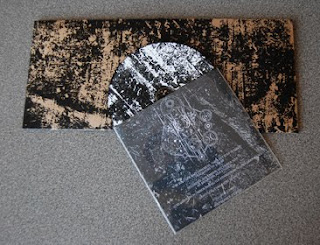 Obliterating sonic nullification via a pure HNW recording by black metal auteur Nekrasov. This approach has been hinted at before in many of Nekrasov's recordings but never fully embraced; on this recording for Void Seance Nekrasov commits fully to the stagnation of the wall, churning out just over an hour of flooding constancy, an subtly glacial piece of white noise and black hyperstatic that advances so slowly it seems nothing more than a sample of belching distortion turned over on itself a thousand times, giving the illusion of no change or growth across its runtime. This is the hallmark of HNW recording-the reduction of ideas into simple cognitive power, the brutal thrum and chortle of living electricity showering over the brain and melting down nerves into puddles of subservient jelly. At its best HNW achieves a truly psychedelic, time-stopping effect, and Nekrasov's contribution to the genre ranks as one of the best.
Perhaps its the inherent nihilism found in Nekrasov's black metal offerings that allows the project to switch so effortlessly into industrialized black power ambience; perhaps it's nothing more than a refutation of form and the willingness to endure and punish that imbues this band with the vision to go so deeply into the true, pure black. The argument could be made that this sort of sound is the true essence of black metal-the ultimate rebellion, the ultimate fuck you in the form of utter rejection of song-which delivers a feeling of hopelessness and isolation that only total silence could better achieve. Ancient groups like Abruptum were veering towards this type of chaos invocation at black metal's inception, while early power electronics groups like Whitehouse and Ramleh were treading this line even more precariously but never totally giving in. HNW records are really endurance tests, drowning pools for pain-minded head-trippers to ensconce themselves in until they're beautifully erased. "In Solitude and Darkness..." takes that aesthetic and corrupts it to fit a bleak picture of blown out black metal gold at the end of the vomit rainbow, where speed and primalcy collide in a defiling torrent of burbling foulness, the sound of tar boiling over miles below the earth. It's a muffled scream from under mounds of funeral dirt, a choking cry for release from the agonies of entropic boredom.
Whether Nekrasov gives over fully to this direction remains to be seen; previous effort "Extinction" saw the project spending more time with this sort of horrific soundscaping than the white-hot black metal that characterized earlier releases. I'd be happy either way, as almost all of the output i've heard from this unit has been beyond insane, riding the rails to complete collapse stopping just short of total meltdown. Amplifier destruction never sounded so fucking delectable. This is a round trip ticket to despondency, awash in nothingness and reeking of failure. The wall will consume and eradicate; the noise is alive and larger than you could conceive.
Posted by Cory at 5:28 PM