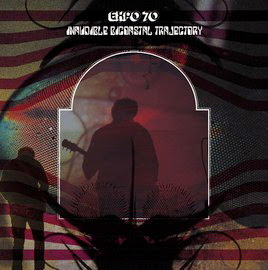 Two excised chunks of lengthy performances from Expo '70's 2010 tour, one from New York and the other from California. I can't help but feel a little bit cheated on this one, because these aren't really complete pieces-they're just 20 minute snippets from what were probably epic brain-melting, fog-drenched jams beamed in from the outerzones. Expo '70 is a project that works much better across the double LP format, where the songs can really stretch themselves into rivers of narcoleptic hash dreams unfettered by a single record's paltry (for this band) 40 minute runtime. "Inaudible Bicoastal Trajectory" just barely allows the mind to warm up and begin to ooze into the crevices of liquification that Expo '70 can summon up, and the whole thing is over well before you've had a chance to leave the earthly realm for territories more astral and vague in their constructions. When you're not throwing yourself into 70 + minutes of this stuff, it seems more like an introduction than a record proper.
Side A is the lighter of the two, the NY side, played spontaneously while the film "Fantastic Planet" screened in the background. The piece is not a soundtrack per se, more like a visual counterpart to an audio performance, but it's hard not to imagine Expo '70's gentle, tangled guitar lines weaving in and out of the syrupy French animation like so much blood through oil, creating rich tapestries of interlocking components that comment on and enhance each other's presence. That sort of prophetic element, the ability of one work to somehow anticipate another despite the separation of years, is reflective of the kosmiche depth that Expo '70 always tries to achieve. This piece forsakes some of the droning heaviness in favor of a softer approach- floating, say, rather than sinking- but doesn't sacrifice any of the trademark stratospherics, delivering cavernous, heavily echoed guitar lines that reach up from the ground like tendrils stretching to the stars. The strain here is less about weight and more about yearning, a desire to see how far you can go before you rip yourself in two.
Side B is far more ominous. Given life in sunny California, this improv finds the band working fixedly in the John Carpenter vein, burping up fat, worming synth lines of bass menace while amplifiers groan and growl alongside them. This is a piece more concerned with stagnancy and atmosphere than direction, and the drones become nearly suffocating across their 18 minute span. Guitars sputter out here and there and some skitterish motorik percussion presents itself toward the track's end but mostly this is just darkness wrought into sound, a heavy batch of mass thrown out for your brain numbing pleasure. It's easy to think of waxy candles burning down while blood drips across creamy, dusty walls in some long lost Dario Argento film; the music doesn't read violent but it doesn't like the light, either.
Taken together the two sides showcase a nice dichotomy that more or less defines the Expo '70 aesthetic. Drone lends itself well to both darkness and light. The major flaw here is that these are mere excerpts-both pieces could easily (and probably did) move in vastly different directions across their actual, majestic, consuming lengths. That we're given mere bits of these performances and expected to come away with an idea of the whole is a little sad; at the same time, it's difficult to picture Expo '70 releasing these sorts of shows in their entireties as they'd all be 3 or 4 LP box sets. It's up to us to connect the dots and imagine exactly where we're supposed to go. Obviously the stars, but 40 minutes will only take you so far.
Posted by Cory at 5:21 PM