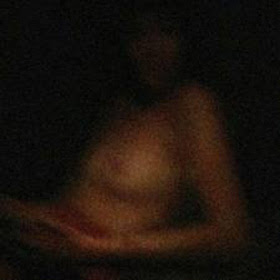 Monolithic to the point of primeval, this is easily the best thing O'Malley has committed to tape in years. "Romeo" is a 40 minute slab of viscous, oozing, evil drone, creeping along the bottom of dirt like some sort of fat, drunken slug. Drudged up from the darker recesses of O'Malley's Paris residence in evocation of the mirage-deadened illusion of the Middle East, the piece slimes along glacially in one direction: down.
Freed from the pretentious confines of Sunn 0))), O'Malley completely lords over tone, belching forth a vomit of free-form sludge and distortion that washes across your brain like LSD melting over hash. Chords waver in and out while a constant whine of amplifier eruption holds sway in the background, crafting a devastatingly oppressive environment that promotes suffocation and total immersion, leaving little room for anything so lofty as contemplation or meditation. "Romeo" is all about sound and totality, the sum of vision and execution minus Sunn 0)))'s meandering bullshit.
My major problem with recent Sunn 0))) material (pretty much everything since "White 1") has been the unnecessary intellectualization and over-complicating of something that should be absolutely visceral and immediate. Drone doesn't have to be labored over; the best material in the genre (Birchville Cat Motel, Lull, Climax Golden Twins, etc.) has a free-floating feel that seems heaven-bound even when it's chained to the earth by its own consuming heaviness. It doesn't have to collapse under the weight of its own perceived importance like virtually all of Sunn 0)))'s latest recordings. When O'Malley is operating on his own the output increases in quality about a millionfold; it's like he's able to tap back into the allure of drone and its deeply magnetic power when he's allowed to work outside the artistic confines of Sunn 0)))'s narrow musical view. Some could say i'm splitting hairs at this point-bloated guitar drone is bloated guitar drone, i guess-but the difference to me is exponential. In the case of "Romeo," guitar + amp = destruction, whereas in Sunn 0))) guitar + amp = bland and overwrought sound installations replete with about ten too many fog machines.
Hopefully this is the future that O'Malley's work will take. I don't need all the posturing and logistics that digging Sunn 0))) demands these days; i'm much happier being crushed under the considerable heft of "Romeo"'s formless empty drone-flow. This is the potential that was so evident in "The Grimmrobe Demos"; this is the promise of Earth's majestic legacy fulfilled. A major work for guitar based droning as well as a one-way ticket to the darkest heart the blinding void, "Romeo" summons the abyss and carves it into something without shape but entirely terrifying. Recommended.
Posted by Cory at 6:57 PM