SKULLFLOWER "FUCKED ON A PILE OF CORPSES" (Cold Spring) 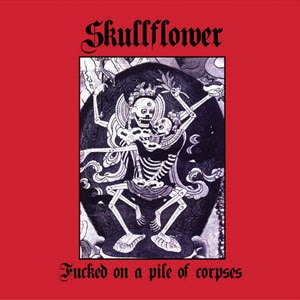 Like a gilded warhorn flowing over with blood, so trumpets the new Skullflower record, misting all with a clouding stormspatter of rage and humiliation. Continuing down the path of epic Wagnerian destructionism that he began to blaze with last year's amazing "Strange Keys to Untune Gods Firmament" record, here Matthew Bower reins in his magnificence impulse to give us a record beholden to brevity but sacrificing none of the symphonic mentality that has made the modern Skullflower such a fucking monolith. This shit will completely level you, tell you you deserve it and then piss all over you, all the while screaming some pagan spell of disease to the churning skies overhead.
"Fucked on a Pile of Corpses" opens up with a strangely melodic blast of bass-heavy thrum and throb, a pulse that opens up to full on torrential bursts of waste that wither back into sonic lava. Soon after Bower unleashes the beast and throws down a near definitive Skullflower psych-waste trawl through group improv beginning with "Viper's Fang," as devastating a group piece as the type found on more rock oriented records like "Infinityland" or the mighty "Last Shot at Heaven." Guitars scream and wander while drums plod ever onward, stuttering and blunt, striving to outweigh the bulk of Samantha Davies' death cello. This sort of attempt at classicism is not lost on me; Bower's approach to sonic painting remains distinctly Wagnerian as he tosses on layer after layer of quaking melody and raging feedback, resulting in a bulk of songs that serve more as an extended suite than any sort of collection.
As usual one track flows right into the other via abrupt wall cuts; one scream is replaced by another and the beast rumbles on. After the full on band attack of "Viper's Fang" things get more blurrier and more aggressive, with the players summoning up dark storms of audio discontent and unleashing them through the speakers. "Fucked on a Pile of Corpses" is all as one, a mountain to climb or an ocean to traverse, and despite its meager runtime the album proves an enervating listen, sapping as much as it can from you in the time it forcibly occupies your space. Skullflower disallows concentration, wresting you from comforts and throwing you into an existential void where coldness rots at the center of foulness and the stench of raw disdain and challenge hang rife in the black. This is violent music, made for dark worship in abandoned churches, with chalices raised and rites invoked. Knives will gleam in the night and blood will be drawn; fornication and abuse trade themselves up to a sort of self-styled absolution, and a troubling transcendence is granted via ancient invocations of magick and an open embrace of chaos. Skullflower births dead dreams; Matthew Bower conducts sickness through the mangled strings of a guitar and the electric howl of amplifiers unleashed. Lee Stokoe asserts himself here as well, adding significant presence to Bower's manipulations and cloaking the whole ordeal in vile, fetid atmospheres that owe much to his work with Culver. At this point it's difficult to imagine Skullflower without him, the progressions he's coaxed out of Bower yielding much of the band's best work. Turgid Animal owner and operator George Proctor contributes here as well, pretty much cementing this as one of the most saturated Skullflower recordings to manifest. There's a definite power electronics feel to the proceedings, but Bower's willingness to let "traditional" structure seep in via drums (however buried) and vague melodies allows "Fucked on a Pile of Corpses" to reach the near celestial highs that "Strange Keys..." reveled in. This is pure beauty forged from the rancid fires of anger and hatred, proof that majesty is rightly born from lineage.
While it isn't the unbelievably epic statement that "Strange Keys..." or "Circulus Vitiosus Deus" was, "Fucked on a Pile of Corpses" is prime Skullflower, another instance of Bower's juggernaut operating at peak artistic opulence. He simply cannot miss. For all this record threatens to give into its own weight, Bower brings it all back on the final track "Sleipnir"; underneath walls of horrific noise and piles of guitars, the drums ever so slowly begin to assert themselves until you're finally forced to acknowledge the idea that this isn't as far removed as it purports to be. This is the endpoint of all psychedelia, the surrendering of shape to become something formless and powerful, a rattenkonig of musicianship that relishes the creation of sound above the creation of music. This is holy inversion; this is black sacrament; this is pure and true and absolute. This is the end, the void, the rejection. This is the sound. Fucking perfect.
Posted by Cory at 6:52 PM