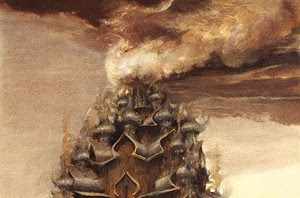 A partially successful collaboration between Locrian and Horseback, diving into the vaguer reaches of black metal and power electronics and emerging with something not entirely new but far from derivative. For two bands with such prolific back catalogues the most striking thing about "New Dominions" is its scant length. Across a one-sided LP running a little shy of 20 minutes, the two entities cross swords and see what happens when the sparks congeal, birthing a study in coldness and industrial wastescaping that evokes both Joy Division at their most despondent and the more challenging sides of forefathers Skinny Puppy. Whole both artists have aligned themselves with black metal on past efforts, "New Dominions" eschews that influence almost to the point of dismissal; were it not for the rasping vocals or the frigid aesthetics this is a record that could easily sit alongside more ambitious, pop-oriented depressionism like Have A Nice Life or Sun Kil Moon. The tracks here are monotonous, repetitive, and mechanical-the sad part is that only one of them is any good.
"The Gift" opens the record with an aura of bleakness, as bowed metals and muted percussion create a din that never gives way to more than an incessant whine. Distant vocals attempt to further convey a sense of harshness and inhospitability; without any real framework as far as composition goes the vocals end up sounding out of place and unnecessarily caustic. Here the ensemble comes across as unbelievably minimalist, building up a lake of sonics that reminds of something a band like Wolf Eyes would have thrown away. The track treads water for about six minutes until it peters out into nothingness; there's no memory of it beyond a collection of creaking blanditudes.
"Our Epitaph" fares much better and more or less justifies this LP's existence. Immediately more recognizable as an actual composed work, the track springs forth from a massive, brutally simplistic two note bassline; the repetition is so bludgeoning across the song's near 15 minute expanse it creates a sense of disorientation and near nausea. Vocals here are much better, cruel and distant but clean, surgical, menacing; the sense of something wrong lurking beneath everything you're being presented with is very strong to the point where a gnawing fear begins to creep in to the cracks. You want to attach yourself to the melody but it's so laconic and unrehearsed that it feels more like a lament than any sort of human expression; a ghostly message from far away, clouded and dwarfed by machine-like waste and an endless emptiness. Guitars and metals scream from a void place, growing ever louder and more commmanding, eventually overtaking the track. "Our Epitaph" is a masterful, measured exercise in the creation of tension and manipulation of the listener's expectation of release. The fact that none is forthcoming, that the tension just mounts and mounts, that the knife just twists deeper, is illustrative of the tremendous powers both Locrian and Horseback can harness when they're working at peak levels.
Supposedly "New Dominions" is based on a nonfiction book that postulates humanity's quality of life given total environmental collapse. I could care less; i don't get that idea from this record at all. The amazing, gorgeous cover art hints at destruction, decay, and ruin; the images of fire, rust and the destruction of structure leave little to the imagination. But the music doesn't achieve that sort of vision-this is troubling material that caters more to a personal perspective, something that each listener will have to attach meaning to on their own. This isn't a story, and it seems fairly ridiculous to me that either the band or the label insists it is. The length of the LP doesn't really permit that sort of involvement; it seems arrogant to state that 18 minutes is enough to sustain a book-length narrative. What this is, though, is a tremendous piece of vinyl art, a communication between two viewpoints that manages to create something stronger than either viewpoint's singular vision (at least in the case of "Our Epitaph.") I'd love to hear more from this pairing, perhaps across a double LP format where they can attempt to marry their far-reaching ideas of nonfiction adaptation to the appropriate amounts of material.
Posted by Cory at 6:53 PM