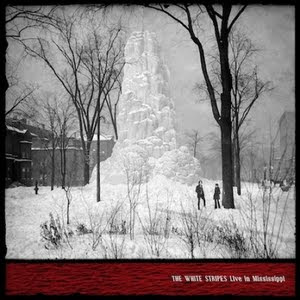 The final White Stripes performance, recorded for posterity and released in a gorgeous 2LP edition that pretty much doesn't exist (it was given only to members of the Third Man Vault); if nothing else it serves as a fitting reminder of just what the White Stripes gave to me personally in terms of refining my own musical aesthetics. This is a fierce show, burning with a near religious fervor as Jack White screams his breath away testifying to the righteous power of interpretation and gives in to pure regressionism. Both he and Meg absolutely demolish these 22 tracks, bashing them into the ground and leaving little other than crushed viscera behind, along with a muddy mixture of sweat, blood, sex, and the intoxicating magic of rock and fucking roll. As overhyped as the White Stripes got towards the end of their career (my review of their final album was incredibly negative, and i still stand behind it) they could always summon up that inner animalism and channel it into something grossly direct and unfettered, a straight line to adrenalized swagger that seemed as drunk on life as it did on music. At their best the Stripes were a near holy experience; this double record exists as a document of that shining light.
Drawing deeply from their own discography as well as the geography of the venue (they turn in covers of both Son House and Robert Johnson), "Live in Mississippi 2007" finds Jack and Meg at the precipice of their fame, just about the time Jack began overreaching artistically and right before Meg found herself collapsing under the weight of notoriety and anxiety. There's a definite "live wire" feeling to this set, a surging blue electricity that screams nervousness as much as it does rehearsal. The White Stripes were never a tight band; instead they lived on the immediacy of their material, going in the direction that seemed most right at any given time and often emerging with brilliant, intense communication between themselves. In some instances the songs could suffer from these stripped down renderings ("Icky Thump" benefits from its bloated production on record) but just as frequently they soared to new heights ("Hotel Yorba" becomes a much better song live, while "Ball and Biscuit" easily transforms itself into a thrusting knife of splintered guitar fury, spitting solos like shrapnel); there were very few lackluster White Stripes performances, and even fewer that didn't have some sort of madness floating through the air. The amount of sound Jack and Meg wrench out of one guitar and one small drumkit is extraordinary, especially on Meg's end-her persistent bass drum monotony easily falls into the "earth-shaking" category, while her reliance on the ride cymbal lends every song a feeling reeling, near-drunken intensity. She even takes center stage for a few minutes to snake through "In the Cold, Cold Night;" reminding us why pretty much most every indie kid on the planet wanted to fuck her. Jack warps his guitar with a sick amount of octave pedal transmogrification and his fuzz tone wanders very close to fields of warm and bitter nauseau, filling space with waves of crackling distortion and the stray excursion over to the keyboards and organs. His solos, while never flashy, rage with amateurish aspiration to mountainous heights (in just a few years he would be the one of the subjects of the amazingly insipid documentary "It Might Get Loud" alongside Jimmy Page and The Edge) but remain grounded by a Greg Ginn-esque passion and willingness to vanish into the music and the moment. Perhaps that idea suits both Jack and Meg best, that comfort in receeding into the sounds and disappearing into the exact manifestation of the NOW.
Whether they knew somewhere that this was the end is up for discussion; it seems like they were staring down at the earth from the most outer reaches of space. They were at the height of their powers here, having taken their own material as far as it could possibly go and choosing to pluck from history the choicest bits of regionally relevant (as well as musically) material to shred into pieces, creating frothingly livid versions of classic blues stompers that raged harder than anything they'd come up with on their own. Yes, the White Stripes could get heavy, but they never sounded more insane than they do here tearing up "Stop Breaking Down" or "Death Letter." The birthplace of the blues seemed to get at something that was desperately wanting to get out of Jack and Meg. Like the similarly revelatory take on "Ain't That a Shame" that appeared on Nirvana's "With the Lights Out" set, these covers illustrate the power that primacy and aggression can hold over a band, and when said band is open enough to allow that demonic spirit to waft in and take control, the results can be magnificent and larger than any venue could hope to contain. This is the place Jack and Meg get to here; this is the White Stripes at their absolute best. There's a simple joy here that transcends any conceptual misstep found in their recorded work; this is the shit that matters.
It's sad this work didn't make it out to a wider audience. It would have made for an amazing swan song, as well as an excellent reminder of exactly why the White Stripes were so great. Few bands can work so simply and be as effective; cutting everything away and leaving you with just the riff only works when the riff fucking kills. And most of the Stripes' riffs do. I still remember the first time i heard "Expecting" and how it completely flattened me where i stood. This is what power sounds like, i thought. This is where i need to get to. Near a decade since then and i'm still trying. The White Stripes help me remember how.
Posted by Cory at 7:28 PM