GATES "THEY HIDE IN THE SHADOWS" (Handmade Birds) 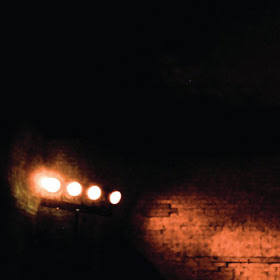 Oozing slab of overlording guitar drone mixed up with Scorn-like approaches to soundscaping, approaching something frighteningly immediate and visceral. "They Hide in the Shadows" documents a live performance in Canada circa November 2011, and what few supplicants bore witness to this scourge are probably still reeling from the mass of it. Gates owe heavy debt to the obvious forerunners of the metallized drone scene, offering up a guitar avalanche that recalls the finest moments of both Earth and Sunn 0))), but where both those projects were content to wander in bloated stagnancy Gates grab you by the throat and grind your face in the artistic dirt. This is a heavier record than anything Sunn 0))) have issued; the guitar tones alone threaten suffocation. And while Sunn 0))) have attempted to marry black metal aestheticism with drone menace, Gates gets it perfectly right, creating a horrid mesh of crushing atmospherics tied to throat-shredding vocal theatrics that recall the violence of black metal without dipping into the shallow pool of imitation.
With three songs clocking in at thirty-three oppressive minutes, "They Hide in the Shadows" serves up total immersion in crumbling fuzz towers and scathing electronics. Frigid and stoic minimalism gives way to roars of free-flowing amplifier sludge; wave after wave of the stuff sloughs over your ears until consciousness becomes a receding memory. There is little room for comfort in Gates' room, with the only respite from the carnage being the few moments of gentle drift before the guitars come slaughtering back in, merciless and hungry. The second track features the histrionic vocal performance, a hysterical and violating invasion of space that recalls the power electronics work of Whitehouse or Prurient. The emotions are obviously different, but what Gates lack in comparison to the sorrowful lamentations of Prurient or the sheer misogyny of Whitehouse they make up in pure lung-shredding force, as convincing a portrait of anger and frustration as anything William Bennett ever laid to tape. That only one track features these mangled words serves the record well; 3o minutes of this sort of exorcism would easily become overbearing, threatening to detract from the equal power of the music.
What's most impressive about this is that it's a live performance; these guys actually set up in a space and thrust this out in the flesh. Having seen Sunn 0))) several times and been bored off my ass, i can safely say this Gates appearance sounds like it was devastating beyond compare. Too often drone artists are let off easy, with the performance demanding little more than the actually button pushing it took to create it. Here you get the feeling that this was a ritual, something special and secret and not meant for every ear. "They Hide in the Shadows" was nothing less than a summoning, a vexing of forces wavering beyond the wall of the everday, an evocation of superb and majestic violation. This sort of force warrants attention; this is true power ambient. Can't wait for the full length.
Posted by Cory at 6:20 PM