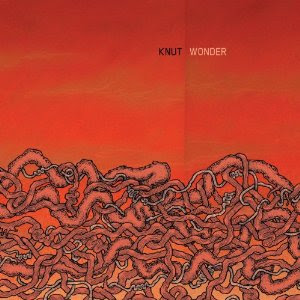 I guess Knut only had one really great album. "Terraformer" was a masterpiece of post metal hardcore deconstructionism, a rewriting of the form as was already known, a willingness to bend the genre into a shape it wasn't comfortable taking. Vocals were sparse and gave way instead to meandering elliptical instrumentals as engaging and hypnotic as they were difficult and obtuse. Said album obviosuly and easily trumped everything that came before; the fact that an equally challenging remix album was birthed from it is testament to its actual scope and expanse.
So here we have the follow up, "Wonder." Nothing too great here, nothing too amazing; instead a sad throwback to Knut's formative years as a mathematically inclined angular powder keg of hardcore, less interesting than, say, Keelhaul, but more powerful than, say Give up the Ghost or Modern Life is War. There's a ghostly sort of threat to what Knut do, a sort of defiance that at times makes you admire their position but at other times makes you feel like hardcore is the most boring genre on earth. It's tight and narrow to the point that there's only so much you can do within its confines; if you try and work outside of them you're no longer allowed to play.
The best tracks on "Wonder" are the instrumentals; freed from convention, or even the vaguest wisps of accessibility, here the band cut loose and set out to really demolish the structures they've crafted. The sub-Botchisms that define the vocal based tracks here become almost revelatory, meandering missions up the dark river of hardcore post-modernism to the very heart of inspiration. But these missions never reach their goals. Something happens on the way every time. A choke, a gasp, a disease, a descent into insanity. The destination is always out of reach, that forbidden shine glinting off the city of gold, the luring promise of eternal life from a draught off the fountain of youth. It's a mirage, a trick, a cruel deception. For every glorious moment of instrumental dexterity and mesmerization there's a bland and unnecessary vocal extrapolation. If Knut are going to realize their potential they need to embrace the world of instrumental music and realize that challenging audiences is far more important than connecting with them in a superficial and abrasive way. Anger is the easiest emotion to convey and the least enduring; far better to miss a little with real depth than to succeed with needless violence.
Posted by Cory at 5:53 PM