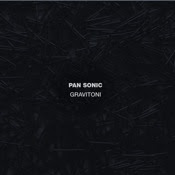 Pan Sonic's swansong, an album of cold industrial atmospheres and supposed black metal aesthetics that leaves me strangely nonplussed. I've heard many people gushing over how amazing this record is and how "fucking crushing" it is but i've heard better and i've obviously heard far more crushing material. To me this is minor league industrial playdating with a couple of guys who can push buttons and make some fairly harsh sonics but there's no real interest in challenging the audience or testing endurance limits.
It isn't all bad. A certain sort of punishing stride is hit on tracks four and five, when all the volume gets amped up and the distortion levels are pushed further into the red. These two tracks are the meat of the album, the "crush" that others refer to, and if Pan Sonic had let the album continue in this fashion i might have felt differently about it. Instead those two songs are the apex of this album's noisiness and while i understand that pure noise and utter immersion have never been Pan Sonic's ultimate goal, it would have been nice to have gotten lost in that assault just a little further. A pond could easily have become a lake with enough encouragement and time, and maybe that lake could even have become an ocean.
Rather we get a soft and quiet canoe ride through a dark ambient river, beneath a vaguely starless sky while massive stone rifts rise on either side. It's darkness, stark and pure in its simplicity. Only on the final track does the roar return, however weakly, to try again to rip asunder your conceptions of what "intelligent" electronic music really is. There is so much potential here gone unfulfilled. I know that as a casual Pan Sonic fan i'm in the minority with these opinions but as something of a noise devotee i can't abide hearing people attach descriptors to this album that shouldn't be there. If you truly want crushing then you need to listen to some Kevin Drumm or maybe the Rita. Then, once you understand what that word really conveys, you can begin to use it more appropriately. If Pan Sonic ever rises from the ashes of their self-induced demise i hope they'll choose to follow a more abrasive thorn-ridden path; until then "Gravitoni" serves as a mediocre (but serviceable) capstone on a mediocre (but serviceable) career.
Posted by Cory at 4:26 PM