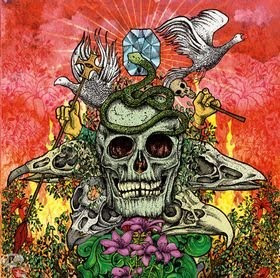 Fairly ecstatic and ritualized forms of musical worship dedicated to the Sun City Girls, coming off as a more electrified version of the same without ripping them off. Not easy to do! MMB go off the deep end here, more than surpassing their expansive and exploratory debut. The group benefits immensely from choosing to focus in on one particular sound and mine its every vein rather than going out in all directions and creating a resultant mess of world-music glop and avant-drone posturing. Everything on "Totem One" sounds pure and real, the music imbued with a sort of buzzing and blissful zen transcendence that lets you get in and float away within minutes.
There is a heavy emphasis on nature throughout the proceedings, as many of the tracks have a sort of "campfire/gamelan" feel. The whole album sounds more like a field recording than a studio effort; such an organic approach to the sound and construction of this record produces an intimacy necessary for deeper communication (communion?) and engagement with its audience. While SCG always maintained a sort of humorous and detached distance, even at their most sun-drenched and devotionally fervent moments, MMB are looking to connect with something. There is an understanding in this band of what SCG were always truly reaching for, what they were so easily able to find and tap into. Maybe the detachment came from its effortlessness; it wasn't jadedness so much as it was existence in that realm. Ambrosia was really only meant for the gods.
So this is heaven, then. Or maybe some other plane or dimension. Maybe another sort of consciousness only reachable through deconstruction of self and the use of other forms of communication as doorways. If you can crack the sky open you can bask in the primordial wisdom of the godhead. If you can pry open the third eye you can bear witness to the exaltant majesty of the true endless, the widening void of all that is and all that can possibly be. This is the sound of constant sunlight, the sweat and the din and the buzz, the chimes and the voices rising up in choir to join with all the sounds you're incapable of hearing in your impoverished state of diminshed perception. Modernity and technology work in tandem to obliterate the purity of the astral. Master Musicians of Bukkake, like the Sun City Girls before them, are one of very emsembles (especially outside of the Indian masters) capable of prying open the door and letting you peer inside. Hopefully that small peek is enough to whet the imagination and encourage a more thorough exploration of what lies beyond.
Posted by Cory at 5:32 AM