THE MELVINS "THE END" (Enterruption) 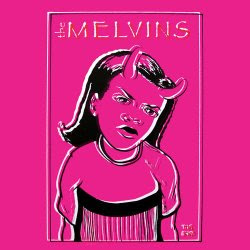 Extremely limited live LP from the Melvins. Unfortunately the quality of the performance doesn't quite match the scarcity of this album; i remember being distinctly disappointed when this sucker sold out in about 20 minutes, but now, having heard it, i feel pretty okay about missing out (although the collector in me still yearns a little bit to see it glowing all neon fuschia on the shelf...it'd be pretty awesome.)
The show itself is recorded well, soundboard at least, from the 2003 tour. The lineup is classic as well-Buzz, Dale and Kevin Rutmanis-but the set is way too short and seems to be a bit of the Melvins by numbers. The most annoying aspect of the whole presentation is the presence of some fairly terrible edits between tracks-i would imagine them the result of necessary trimming to fit the original cassette onto an LP-but there's just no fucking way that you should ever cut ANY part of "Nightgoat" (especially the end-always the best stuff there as space begins to just fall away and a sort of improvisational noise vacuum births itself screaming from the Melvins' wretched maelstrom.) You know you're missing something every time it happens and that really sucks. I wonder how many other Melvins devotees noticed and felt the same way?
The other glaring error is a bit of a dissolve between the band in the midst of the massive "Revolve/We All Love Judy/The Brain Center at Whipples" medley the guys were doing on this tour. They seem to lose one another ever so slightly when Buzzo leads into the ridiculous metal-math riffing of "Judy" and they never quite get it back throughout the remainder. I can forgive the Melvins for having an off night-they've rocked my ears to shit porridge enough nights for me to let a little slip in one of their most technically demanding tracks slide-but why wouldn't they just use a different take from a different night of the tour, or fuck, a different show altogether? Seeing the Melvins so many times has let me witness the fact that the set list doesn't change at all on any given trek, so why'd they okay this?
A bootleg is a bootleg. If it's from a band you love (which is the case here) then any live stuff is cool, especially when it's professionally pressed and kinda-sorta authorized/recognized as an official entry in the discography. But not every live show is essential and not every performance is revelatory, which sadly dooms this LP to a rating of inessential curio at best, a collector's/completist's cash vortex at worst.
The Melvins still fucking rule, though.
Posted by Cory at 4:51 PM