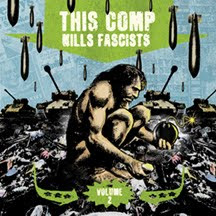 Latest installment in this hopefully ongoing series of Scott Hull-curated explorations of extreme music, shedding light on some of the further corners of grindcore, hardcore and hyperthrash. Compilations are usually troublesome because there's always going to be some shit you don't like or some bands that you think are terrible but Relapse have done an outstanding job on both volumes of this series, mostly due to their choice of Hull to ferret out the best shit and commit it to record. Hull knows this world better than almost anyone (if you don't know, he's the guitarist in the mighty Pig Destroyer and the equally mighty Agoraphobic Nosebleed, as well as the go-to mastering engineer for John Zorn's Tzadik label) and the music he's able to unearth is pretty emblematic of the coolest stuff happening in the grind universe. At a length of 74 tracks spread across 19 bands the compilation can get a little wearying, but if you're looking to be absolutely wiped out by your listening material then this record is more than up to task.
I could go band by band, but i'll just hit the highlights. My guess is you're already sold on this or you aren't-i've discovered that this style of music leaves little room for the middle ground-so let's just focus on the obvious peaks. Hummingbird of Death blaze through 10 tracks of power violence in about 5 minutes, commandeering a brutal fuzz-bass heavy assault reminsicent of Crossed Out or the earliest Hellnation material. Marion Barry contributes some extreme sonic goop laden with blaxploitation and B-movie samples, easing you into a sort of stylized shrieking sex grind; far more intelligent than the average slab or gore/porn grind that Hull thankfully leaves off these compilations (as enjoyable as a lot of the music is, the subject matter usually drags said bands into a realm of unnatural stupidity.) Despise You and Extortion both pay homage to the true and ancient spirit of thrash and speed metal, while Voetsek combines the best of both worlds and turns in a levelling four song set of subtly complex thrash grind mayhem, with some truly weird high pitched vocals that stand apart from everything else on the record. But the total, true happiest surprise here is one 6 minute track from the obscure and woefully undersung Crom, a weird heavy metal/power violence hybrid of mysterious membership (kind of like the Brujeria of grindcore) and undeniable skill. Their track runs the gamut of extreme metal troping, touching every base without embarassing either themselves or the listener. Simply outstanding, and extra kudos to Hull for including them.
With as much shit going on in the extreme metal micrcosm as there is, it's hard to know what to spend time on and what to avoid. Compilations like this one do the curious a true service while providing a decent level of exposure for projects that might otherwise languish in obtuse limbo. While i wouldn't buy a full-length from every band included here, there's a lot that i would, and feeling confident about purchasing records from 10 new bands (or fuck, even two or three) is pretty much worth the 10 bucks i paid for this album. Relapse has been on a serious roll with these sorts of compilations; here's hoping their continued partnership with Scott Hull yields such consistently amazing results.
Posted by Cory at 5:54 PM