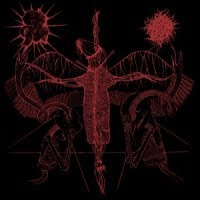 Normally i don't review seven inches as i find the format far too limiting but i'm making a notable exception because of this putrified slab of rotted wax from the much beloved by me Skullflower, here sharing a black circle with ultra-primal underground black metal entity White Medal.
And true black metal this is. This record reeks of the spirit, more drenched and thick than most records i've heard in the last year. Some people are true channels, true shamans, true gateways, and when they turn their hand to something they're able to call forth visions and images more frightening than you could have though existed. Matthew Bower is such a person. I'm getting to the point where i can't even consider him of this earth anymore-he's so far beyond earthly touchpoints and so immersed in his own violent, elliptical universe that to chain him to one dimensional existence seems an incredible disservice. If "Great Hunter" is Bower's approximation/interpretation of black metal, then i want more of it, and i want it RIGHT FUCKING NOW. This is one of the best, hands-down flooring Skullflower tracks that i have ever born witness to. If you know me and my preferences then you are aware this statement is not made lightly. Bower sticks to simple chord forms and turns in an actual song but rather than being a redundant return to tradition this approach leads Skullflower to some dank, shrouded sacrificial altar where the song becomes a black mass hymnal, a calling to darker others and a blanketing of darkness around the caller. This is the sound of void and this is the sound of rebirth, erupting out of the particle smearing of near seven minutes of earth time. Whether this was part of a larger composition is rendered an irrelevancy; Bower forces you to exist in the NOW with him, thrusting you into a cold, horrifying, infinite blank, a howl and an abyss that threatens to swallow all. Simply fucking stunning in every way possible. Bower to me is at an absolute creative peak and shows no signs of slowing down or fucking up; even the short run time (which has been a point of contention in the past for me with Skullflower vinyl releases) fails to negate the nullifying power of this composition.
You'd think White Medal would have to be awfully fucking good to hold up to Skullflower's side of this split, and fuck yes, they are. Their side is a hissing lo-fidelity blast of raw, in the red ultra stripped down black metal recidivism, recalling both its punk roots and it's more regressive modern leanings by way of acts like Akitsa or Bone Awl. This is some seriously noisy shit with white-hot vocals fed through a shredder, a sound akin to lumps of choking earth being forced down an unwilling supplicant's throat. I'm impressed by the electricity of it and feel that it adequately matches Bower's contribution, albeit in a more digestible, less obtuse form.
This is a release not to be missed by any measure. If you're into "extreme" sounds (a lot of people think they are but aren't anywhere close) there is no fucking excuse not to have this. Fucking essential for fans of Skullflower, mayhaps the future right before our very eyes. This is where black metal could go if it achieved its true potential and was freed from theoretical aesthetic obligations. Necessary and utterly transcendent.
Posted by Cory at 5:52 PM